Hard monotonic alignments attend to exactly one vector in memory $h_j$ at output time step $i$ i.e. $c_i = h_j$, unlike soft alignments which use expectation over complete memory to calculate the context vector.

Note that the above model only needs $h_k, k\in\{1, 2, \ldots,j\}$ to compute $h_j$. If we use a unidirectional RNN as the encoder, we can perform online decoding where the time complexity will be $\mathcal{O}(\max\{T, U\})$. Also note that, because of sampling, we cannot train this model using back-propagation. We, therefore, use the expectation of $h_j$ during training (inspired from soft alignments) and try to induce discreteness into $p_{i,j}$ to later decode monotonically. The $\alpha_{i,j}$ defines the probability that input time step $j$ is attended at output time step $i$. We go through a simple, worded derivation below for the calculation of $\alpha_{i,j}$. (You can skip it in the first pass of reading.) 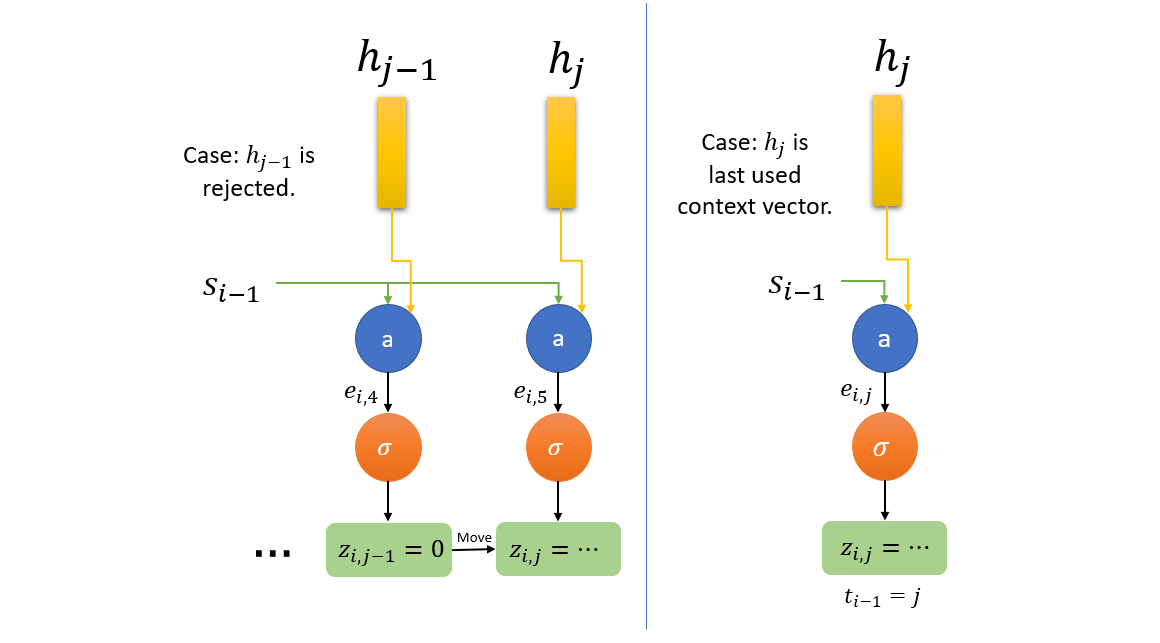 The last relation can be reasoned out by noting that $h_j$ will be a candidate for context vector either when $h_{j-1}$ is rejected or $h_j$ itself was selected as context vector in previous output time step $i-1$. Using above relations for memory vector $h_{j-1}$, we get the relations

Finally putting all relations together, we get

which can also be written as following, allowing us to compute this parallelly by writing it in terms of cumulative products and cumulative sums.

A tricky way to promote discreteness, a zero-mean unit-variance Gaussian noise is added to logistic sigmoid activation. This forces the model to learn to produce $p_{i,j}$ close to zero or one, effectively making it binary.

Energy function used for hard monotonic alignments is as follows:

It is very similar to Bahdanau energy function but a little different because sigmoid function applied on monotonic energy is not shift-invariant like the softmax function. Therefore, for giving in more control on values of energy, the vector $v$ in Bahdanau energy is replaced by a normalized vector $\frac{v}{||v||}$ and then scaled with a scalar $g$ and offset with a scalar $r$. As you might guess, $g$ and $r$ are also learned parameters.

Hard monotonic alignments which I just described are just too hard in their conditions! Using only one vector $h_{t_i}$ as context vector $c_i$ is a little too much constraint and this is reflected in its poor performance on some tasks. A novel solution to this problem is Monotonic Chunkwise Mechanism.

We use a middle path between soft alignments and hard monotonic alignments by allowing the model to use soft attention over fixed-size chunks (say, size $w$) of memory ending at input time step $t_i$ for each output time step $i$. Therefore, model uses a context vector derived from memory elements ${h_{v}, h_{v+1}, \ldots h_{t_i}}$ where $v= t_i-w+1$. The memory index $t_i$ is derived in the same way as in the hard monotonic mechanism. The energy of each memory element is given by the following equation.

The context vector is given by a weighted sum of $w$ memory elements ending at $t_i$. This is exactly applying soft-alignment over small chunks!

The equation derived for $\beta_{i,j}$ can be parallelized using moving sum and computation, therefore, is very efficient. Note that number of parameters have increased (and therefore computations as well) as monotonic chunkwise mechanism is using both $\text{MonotonicEnergy}(s_{i-1}, h_j)$ and $\text{ChunkEnergy}(s_{i-1}, h_j)$. This increase is very marginal, about $1\%$, but the performance of model increases significantly, reaching almost at par with soft alignments for some tasks.

There are two major limitations of the hard monotonic mechanism. First, the one we discussed as a motivation for the chunkwise monotonic mechanism, is that there is not enough context in the context vector as we force the model to capture complex dependencies only using a single memory vector. This concern is almost resolved by using chunks of memory summed over a soft distribution.

The second limitation is the assumption of strict monotonicity in input and output alignments. For example, in translation task, we can expect a degraded performance when translation is performed on languages with different sentence structure i.e. a different order of subject, verb and object, though this assumption can be almost true for structurally similar languages.

We note here that soft alignments, though computationally expensive and unsuited for online decoding, are robust to input-output alignment relations and use a much wider context for producing outputs as compared to monotonic alignments.